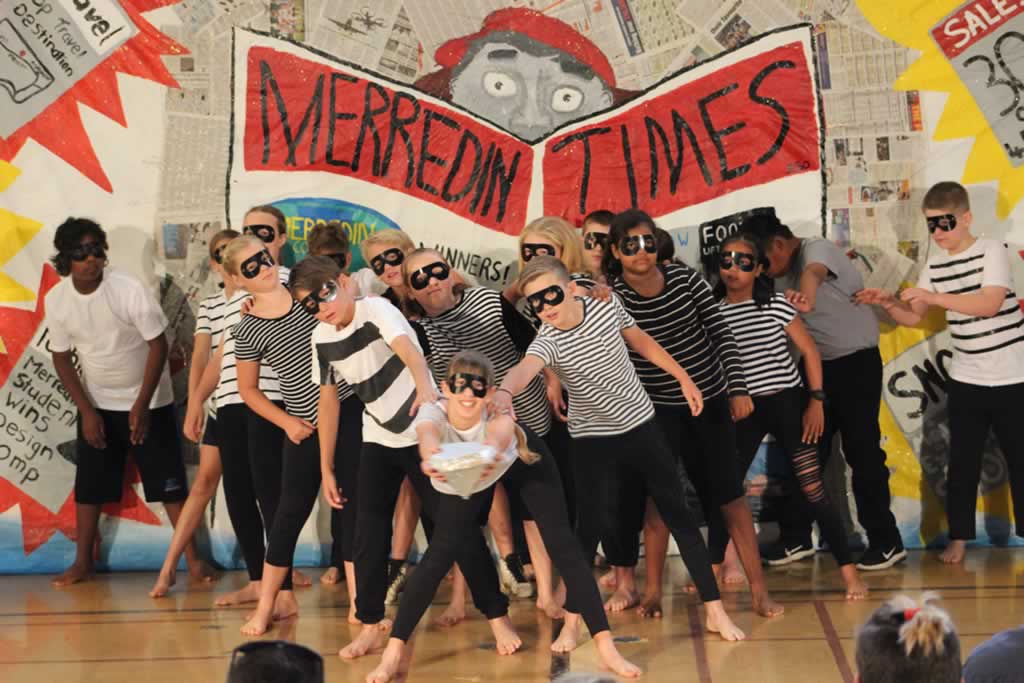 The following night, our Year 3-6 Concert was held hosted by our 2017 School Captains, Hallie and Campbell.  Their jokes flowed throughout the night giving the audience a chuckle in between the performances by classes.  The show was opened with a performance by the school choir –‘ Let’s Go’.  This was followed by the Year 3 class who represented the advertisement section of the newspaper.  We had a musical trip back through time with all those jingles that stick in your mind, ‘Happy Little Vegemite’, ‘Roll Roll Chiko Roll’, etc.  Our Fashionistas in the Year 3/4 class posed for the paparazzi as they sang ‘Shades’ and then strutted the catwalk for their dance item. We then moved on to the sports pages with the Year 4 class.  Ros (Emily) and Roy (Ezekiel) competed in a cross country race with singing solos, with their class providing back up for the item ‘Have a Go’.  Their dance ended with fists raised in ‘We are the Champions’.  Next we went on holiday with the Year 5 class as they sang their Western Australian version of ‘I’ve been Everywhere Man’ and then danced to ‘Ease on Down the Road’.  The Year 5/6 class represented the Crime report with a song called ‘Innocent or Guilty’ representing the story of Goldilocks (Hannah) with the judge played by Jordan.  Goldilocks was sentenced to 10 years hard labour before the class broke into a mash of crime music for their dance.  Miss Beale’s Acro group stunned and amazed us with their ‘Pirates of the Caribbean’ routine before our final item was performed by the Year 6 class ‘Walking on Sunshine’ a tribute to all the teachers the students had from Kindergarten to Year 6. The developing dance skills were evident after three years of dance under the guidance of Miss Beale and the musical arrangements were a triumph thanks to Mrs Adamson.  Our 2018 Year 6 Student leaders were announced as a fitting grand finale to what was a great night!