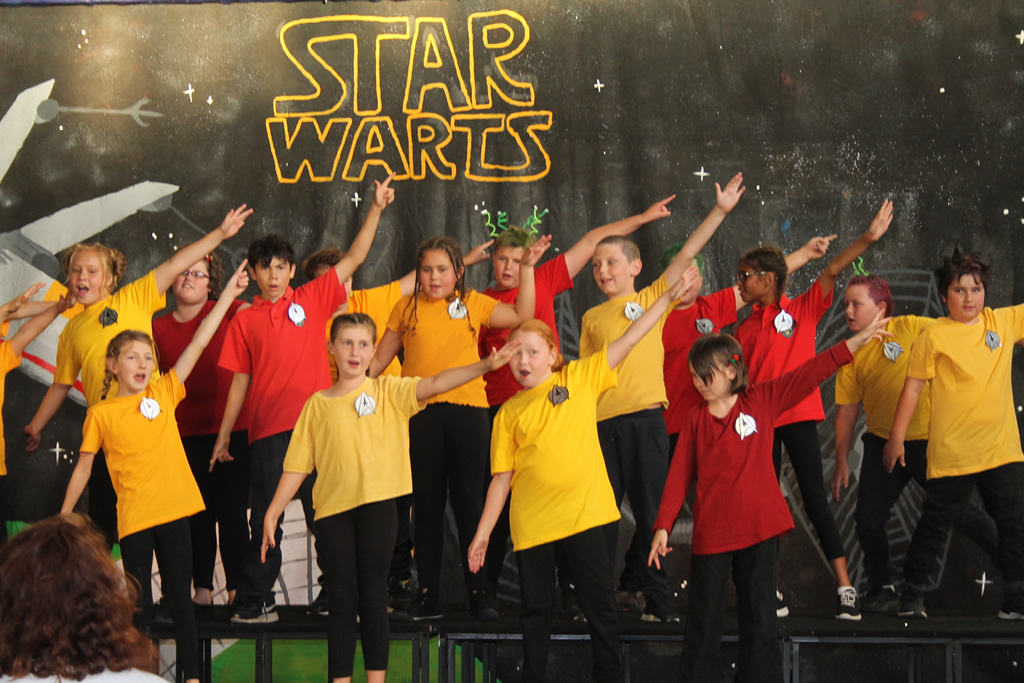 Last night’s MerryDin took us all to a galaxy far, far away with the Year 3-6 student comedy musical, ‘Star Warts!’   The night started with the school choir singing ‘From now on’ before we were flung onto the star deck meeting Princess Nebula, played by Milla Kett, and Querty the android, played by Jacob Billing.  They were being chased by Umperial ships and their only way out was to crash land on a small space station, Junction 51. Our Year 4/5 class became the musical stars at this point with their rendition of ‘Junction 51’. We were then introduced to our other main characters – Daft Ada, played by Chloe van der Merwe, and Luke Warmwater, played by Matthew Pitout. They lived on Junction 51 selling wares and working on ships and we first met them talking to some Aliens – Diddly Squids from Oxymoron. Their leader, played by Marshall Kudas was an important character to draw out Daft Ada’s sad history, of a certain Dr Woo accidentally taking her baby after a case of Star Warts many years earlier – a plotline that developed throughout the musical. When Princess Nebula’s starship crashes into Luke Warmwaters bedroom their adventure begins in a story ‘written in the stars’. Querty reveals a hidden holographic message from Princess Nebulas mum calling on her to seek the help of Toby Wonky Nosebleed, and he (Sam Brunetti) miraculously appears on the scene ready to help after a plea from Princess Nebula, ‘Help me Toby Wonky Nosebleed. You’re my only hope’. Enter Zac Solo, played by Ollie Parker with his companion Nigel the Nookie – a very dramatic entrance of these two heroes with Zac’s hot poses and sporting an awesome mullet! We then heard the Year 4/5s final song ‘Space Trip’ as our heroes headed into their adventure. That was Scene 1! A lot going on I know!

In Scene 2 we meet the evil Mr Umpire, played by Jayden Spencer along with his minions, Sira, his racketeers and space rangers.  They had been shrinking galaxies to punish their inhabitants for pretty minor infractions for example eating with their mouths full. We found out that the evil Mr Umpire had been deserted as a baby (coincidence?????) and his minions were set with the task of recapturing Princess Nebula and the galaxy she was unknowingly wearing as a necklace. Our Year 3’s were our Diddly Squids on stage singing ‘In a Galaxy, far, far away’ first followed by ‘The Diddly Squids’ – they were amazing as they sang and practiced their battling skills.

Scene 3 begins with our Evil Mr Umpire capturing Princess Nebula. We meet Yoga, played by Riley Edwards and he agrees to train Luke Warmwater and introduces him to the ‘Sauce’. A positive power that flows green through the galaxies. Our Year 3/4 class entertained and informed us about the ‘Sauce’ in their musical dance number ‘Squeeze the Sauce’ and a miracle was performed live on stage – reanimation of Gordon, Luke’s floral companion. We quickly spun into Scene 4 with our Year 5/6 class in ‘March of the Rebels’. Yoga provides Luke with Bling Blades – life savers – to use with Princess Nebula to battle Mr Umpire and then we spin into the Year 5/6s second song of the night ‘The Umpire Strikes Back’. In Scene 5 we have a quick battle between Mr Umpire, Princess Nebula and Luke before Daft Ada interrupts recoginising in Mr Umpire her long lost son…..dun dun dun……of course the previously evil Mr Umpire apologises for his behaviour and all is well in the universe again. Our Year 6 class closed the show with a Star Warts megamix of melodies, reminding us all of the adventure we had been on throughout the night.

It was then on to the award ceremony and the surprise??? Performance of our Upper Primary staff – we all laughed at their antics on stage as they mimicked the superb performances of our students! We would like to acknowledge all the hard work of the students and teachers to make this such a special night; our wonderful student leaders Chloe van der Merwe and Sam Anderson who MC’d the night; Mr Tom James who was amazing on the lights; Mr Colin Duff for the amazing backdrop; and especially Mrs Caryn Adamson the creative spirit behind the whole production.