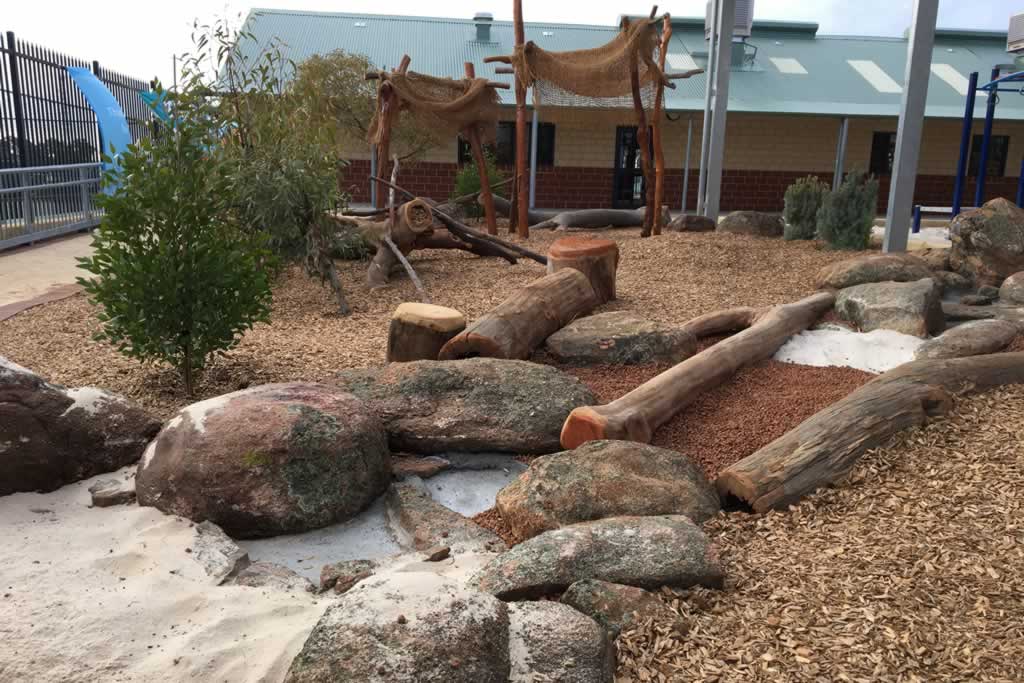 Merredin College celebrated the opening of the new Junior Primary Nature Play Area along with National Tree Day on Friday 26th July. This followed 18 months of planning and fundraising and a marathon effort by our community over the school holidays to get the playground completed. Early in 2018, the Junior Primary staff considered the current play space for our Year 1-2 students as part of our audit of the national quality standards for early childhood and found the space lacking. For children, play is learning and we felt the constructed space did not encourage quality play. After some discussion we decided we wanted to add some elements of nature based play as there is no better space for children to learn than the outdoors, and there is no better play resource than nature. Children innately reap great benefits as they grow connection and appreciation of the natural environment.

Nature play is any activity that gets children active or thinking actively outdoors, with the end goal of building skills and ability to play without the need for adult control. Nature play significantly improves all aspects of child development – physical, cognitive, social and emotional. Playing outdoors grows resilience, self-confidence, initiative, creativity and more. It encourages the joy of movement; it nurtures wild imaginations, experimentation, friendships, social connections and positive behaviour.

These decisions started us on the journey of recapping the Year 1-2 play area. Over the past 18 months, under the direction of Justine Low, our staff have been actively seeking grants and fundraising – we have run cake stalls, sausage sizzles, raffles, made and sold kokedamas, cards and other crafts and all the while had a goal in mind of what we wanted for our students. We spent months combing pinterest for ideas before we decided to invest in an expert, we visited other nature play spaces and when Nature Based Play visited and put their plans for the space to paper we were blown away with their vision for the space and our focus then was on making it happen. The Commonwealth Bank were the first big investors in our vision, with grants from Collgar Community Fund, CBH Grassroots Fund, Ramelius Mine and support from Landmark getting us closer to our financial goal for the project.  Fundraising raised the balance to get us started and in our minds we planned to complete the playground in stages.  We extend our thanks to the local businesses and individuals who provided us with prizes for our raffles – Marie Bartlett, CRT, Liberty Fuels, Kate Downsborough and Kate Baker.

In May this year, Chris Van Der Merwe volunteered to clear the site for us and remove the excess turf and soil and as he began to understand the project he realised just how out of our depth the primary staff were to project manage the build with Terry from Nature Based Play. He stepped up and volunteered to undertake this role and from that moment the project gained momentum.  He had the contacts and knowledge to link the school with the community, gain support and commitment to the project as well as schedule all the works that were required. As the weeks ticked on Chris’s enthusiasm and confidence adjusted our goals and we stopped seeing the project as a series of stages and gained confidence that we could realise the entire plan during the 2019 July build schedule.

John and Sue Goodier donated the rocks and John worked with Chris to get the rocks onto pallets – even those weighing over a tonne – no small feat. John continued to be an integral part of the project with his telehandler allowing the rocks and logs to be maneuvered into their final location on site. The Hardy’s donated the logs which were cut down to manageable sizes and now lay in the playground like they have always been there. We are extremely grateful to Transplus, Landmark and Great Eastern Transport who helped us get all the resources to site – the rocks, logs and mulch.

We also extend our gratitude to Merredin Toyota who donated the trees as well as labour throughout the build week. We thank Two Dogs Hardware who discounted all of the supplies we required – concrete supplies, trees, etc and IGA who helped with the catering required to feed our volunteers throughout build week.

Our thanks also to the mums and dads who provided labour throughout build week, in particular Hayley Billing who coordinated the catering, Matt Crook who dropped everything and came to site when we were short staffed and Dan Ryan who adjusted his work commitments to relay the paving ahead of schedule on the Saturday. We had a great team on mulch day and we hit the noon target to have the sixty-five cubic metres of mulch spread because of the great team work and energy – having the telehandler and bobcat reduced the need for shovelling the mulch and we could concentrate on pushing wheelbarrows and raking.

I would like to offer my congratulations and appreciation to the awesome staff and their partners, particularly Justine Low. The staff have given up hours of their own time in fundraising and then laboured alongside our school community during the build – it has been a labour of love and is a testament to their commitment to the students in their care.

A massive thanks goes to Chris Van Der Merwe who has been a superhero dad and playground builder. The playground would not have been built to the standard we achieved without him.

At the opening of the playground our Year 1 and Year 2 students planted the final trees donated by Merredin Toyota with the help of our gardener and guests. We presented our sponsors and supporters with certificates of appreciation and then watched our students enjoy the playground before heading off to a special morning tea.